The adjustment disorders ICD-10 codes adds a little more specificity with the disorder subtypes but still leaves a lot up to the subjectivity of the clinician. In reality, one might argue that the subtypes bring about even more confusion in diagnosis.

Because the criteria of adjustment disorders are so imprecise, it can lead to numerous problems with differential diagnoses. Here are several diagnoses that may cause diagnostic complications:

PTSD and acute stress reaction also occur in response to a stressor. The difference is that PTSD is in response to a catastrophic event and has severe symptoms that focus on arousal, avoidance, and recollection of the traumatic event. Acute stress reaction is similar to PTSD, except its symptoms must abate within a month of experiencing the stressor.

Concerns in the diagnosis of adjustment disorder ICD-10

DSM-5 gives three-months from the introduction of the stressor until symptoms may appear.

Adjustment disorder is an easy and non-threatening diagnosis. Clinicians are often under pressure to make a diagnosis for insurance reasons and may choose adjustment disorder because its vague criteria make it easy to rationalize. Further, it is seen as a non-serious disorder and many professionals may want to avoid labeling a client with a severe illness. Both of these factors may lead to further over-diagnosis.

The ICD-11, which has yet to be adopted in the United States, makes some major alterations to adjustment disorder. First, it specifies that the failure to adapt to a stressor must cause significant impairment. This lends it a certain severity it does not possess in the ICD-10. Maybe most startling, however, is that the ICD-11 gets rid of the specific subtypes, making it much more general. Instead, it says that preoccupation related to the stressor must cause one of the following: excessive worry, distressing thoughts about the stressor, and/or rumination.

There is little doubt that adjustment disorders have their place in the world of mental health. We are constantly barraged with stress and poor coping reactions are inevitable. However, the vagueness of the adjustment disorders ICD-10 criteria threatens its validity and may lead to its over-diagnosis. All of this uncertainty makes life more difficult for clinicians who are trying to navigate the difficult world of insurance coding and assessment.

Therapists want practice management software that helps them untangle the red tape. TheraPlatform simplifies the lookup of adjustment disorders ICD-10 codes and auto-populates them to the relevant documentation, billing, and claims. The bottom line is that Theraplatform can help and who couldn’t use a little help? Curious? Check out our 30-day, risk-free trial.

While billing may not be your favorite part of work as a therapist, organization, accuracy, and automation can help streamline the billing process and allow you to focus more on treating your clients and growing your practice.

Depression ICD-10 is used to categorize mental disorders including depression. What else should you be aware of when billing for these conditions?

Thank you! Please, check your email to download the billding guide. 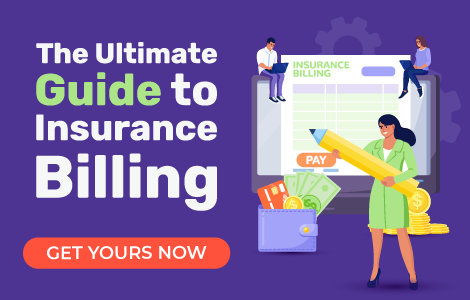