Depression ICD-10 is a World Health Organization medical classification for conditions that fall into the mental, behavioral and neurodevelopmental disorders space. Many conditions from mild to severe depression, seasonal affective disorder, and postpartum depression, among others, fall into this category – all with their individual Depression ICD-10 designations. Diagnosis is determined by the inclusion and severity of numerous symptoms based on the Diagnostic, and Statistical Manual of Mental Disorders fifth edition.

Depression is often used in everyday speech to describe feelings of sadness or melancholy. While feeling sad is often a primary symptom of depressive disorders, the clinical features are much more complicated and their expression is much more severe. Depressive disorders can negatively impact careers, relationships, and even your willingness to live.

The following are the most well-known depressive disorders as found in the International Statistical Classification of Diseases and Related Health Problems 10th Revision (Depression ICD-10).

When someone describes depression, they are most likely referring to a depressive episode.

An estimated 21 million adults in the United States have had at least one depressive episode. That is 8.4 percent of the adult American population. The prevalence of a depressive episode is much higher among females (10.5 percent) when compared to males (6.2 percent).

In the ICD-10, a depressive episode involves 10 symptoms. The first three are key symptoms. At least one of these symptoms must be present most of the time for at least two weeks:

The next seven symptoms will determine the severity of the episode and the exact Depression ICD-10 code:

The above seven symptoms should be present for a month or more for most of every day.

Mild depression is the presence of two or three symptoms

Same as F32.2 with the presence of psychotic symptoms, such as delusions and/or hallucinations.

A lot of mental health disorders have depressive symptoms. It is easy to mistake them for a depressive episode if you don’t pay close attention. For example, bipolar disorder is made up of a depressive episode paired with a manic episode but they often occur months apart. If the client is currently feeling depressed, it can be easily misdiagnosed as only a depressive episode. In this case, it is critical to examine the client’s personal and family history. It is essential for clinicians to get the full picture of their clients for accurate diagnosis.

There are not many restrictions for a recurrence. The first episode may occur at any age and happen again at any time. It may initially be diagnosed as a depressive episode but must be changed to recurrent if it happens more than once.

Diagnostic note: In the Diagnostic, and Statistical Manual of Mental Disorders fifth edition (DSM-5) dysthymia and chronic major depressive disorder have been consolidated into one disorder but that is not the case in the depression ICD-10 and the upcoming ICD-11.

Postpartum depression (PPD) is a recent addition to the ICD-10. It affects approximately 10–15 % of mothers yearly. Depressive symptoms last more than 6 months for 25–50 percent of those affected.

It should be noted that this diagnosis is a work in progress and many people believe that PPD is more complicated than a depressive episode that happens in the month after childbirth. Mothers (and some fathers) report issues such as a lack of infant attachment and feeling disconnected from their partner, but these are not included in the formal diagnosis of postpartum depression in the current depression ICD-10 or DSM-5.

It is important to distinguish PPD from the “baby blues”. Up to 70 percent of all new mothers experience the “baby blues,” but the features are not as severe or long-lasting. Symptoms may include: crying for no apparent reason, irritability, and anxiety. These indicators usually clear up within a week or two post-pregnancy without treatment.

What is Seasonal Affective Disorder (SAD)?

Often discussed as the “winter blues”, SAD gets a lot of attention, especially in cold weather. It is estimated that 5 percent of Americans experience seasonal depression each year. It is identified in the DSM-5 as a major depressive disorder with seasonal patterns. The depression ICD-10, however, does not have its own category for SAD. Instead, it is often diagnosed under F33.9, major depressive disorder, recurrent, unspecified.

Anxiety ICD 10, types of anxiety disorders and their corresponding ICD-10 codes will be discussed in this article. In addition, we will cover inclusion criteria for each disorder.

Insurance billing and claims filing is without a doubt one of the most frustrating tasks clinicians and therapists face. Unless you have a strictly private pay practice, billing is something you have to contend with on the daily. Insurance benefits, copays, deductibles, ICD-10 codes and those dreaded CMS-1500 forms…ugh! 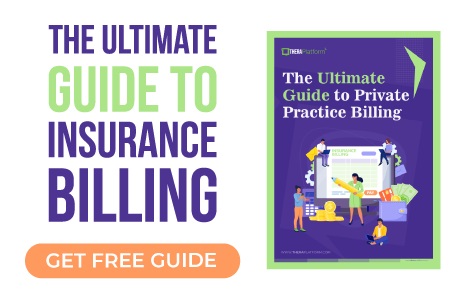